What sunglasses was Joe Burrow wearing?

You can order them here in red: https://malikdupri.com/products/guapo-red

For the first time in three decades, the Cincinnati Bengals finally made it to the playoff games and became winners. The game, the excitement, the fans and other action-packed moments weren’t the only things that caught people’s attention. The internet has been set on fire after Joe Burrow stepped up for the postgame press conference and caused a stir over some flashy eyewear!

Burrow was asked about the significance of his stunning sunglasses while basking in the limelight. However, his response was simply: “No significance,” he said. “I think they’re pretty cool. What do you think?” Burrow said.

Joe Burrow’s stylish fashion has got lots of his fans admiring him and seeing them comparing the super bowl winner to other celebrities such as actor Robert Downey Jr., a man popularly known for his famous role as Tony Stark in the Marvel movies. Many have thought Robert Downey was the inspiration behind his stylish eyewear.

What sunglasses was Joe Burrow wearing?

Joe Burrow was putting on a pair of Malik Dupri sunglasses inspired by Cartier when he stormed the press conference room for the postgame discussions. Thanks to Malik Dupri Morris, who was the brain behind the sunglasses.

However, it was Joe that brought the glasses more into the limelight. It got so famous that Burrow’s teammates had no choice but to wear the sunglasses even on Instagram and press conferences.

Dupri said the inspiration for the design came from the Cartier style and wanted to make a more affordable version of the Cartier pair. Dupri further explained that Joe going on National TV with those sunglasses was certainly wild. He further stressed that he had already got ESPN asking about the pair. Despite the attention from both National TV and the press conference room, both Joe and Dupri are yet to meet each other to set up an official partnership. 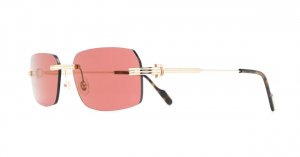 You can find them here:
https://www.designereyes.com/collections/cartier